“We are pioneers of the Ukrainian style. There is no mistake for a fake. We did everything we could. Whoever can, should do better than us,” the creators of one of them wrote on the pledge board. On the Day of Architecture of Ukraine, we talk about its best examples

The ensemble of the Kyiv-Pechersk Lavra is a landmark of the history and architecture of the Middle Ages and Early Modern times (Kyiv Rus’ and the Hetman period), one of the largest shrines of Orthodoxy in Ukraine and Eastern Europe. Located on the plateau of the high right bank of the Dnieper, the Lavra ensemble was formed over many centuries. The harmony of the architectural composition of the Kyiv-Pechersk Lavra is due to the Ukrainian Baroque master Stepan Kovnir. He contributed to the construction of the Lavra after the terrible fire that befell the monastery in 1718. In the Lavra, the master built the Kovniriv building, as well as the bell towers in the Near and Far Caves. His works also include the church in the Chinaiv desert and the Cathedral of Anthony and Feodosius of Pechersky with a bell tower in the town of Vasylkiv in the Kyiv region. 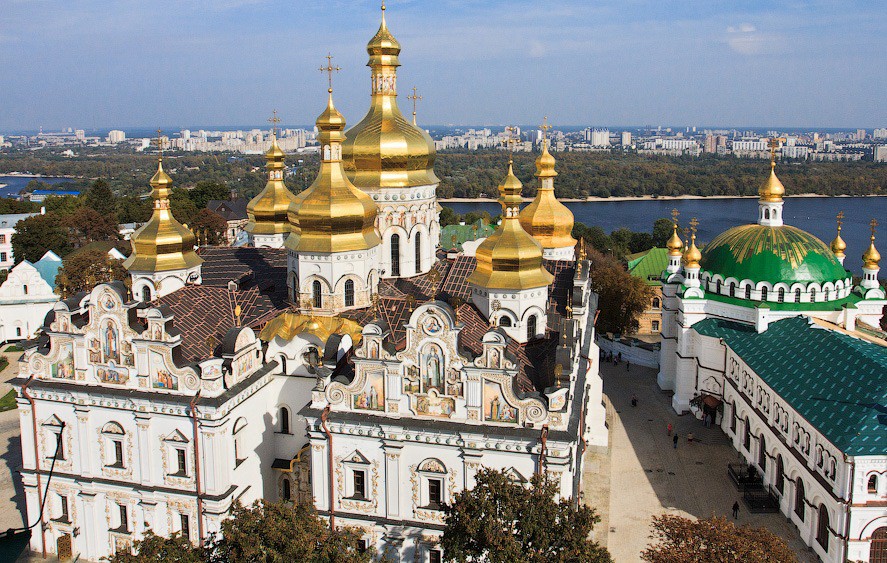 The fantastic “House with chimeras” on Bankova is one of the most famous buildings of our capital. Its richly decorated facade looks like an illustration for a collection of fairy tales. Here, lizards run rapidly along the columns, beautiful girls sit on fish, dolphins, sea reptiles and crocodiles bend their tails and backs; huge frogs, heads of rhinoceroses and antelopes are surprising in size; spread the eagle’s wings predatorily; and the streams of rainwater are controlled by elephants, whose trunks serve as gutters. The building, which is a representative of the Art Nouveau style, was designed by the architect Vladyslav Horodetsky in the form of a cube: it has three floors on one side, and six floors on the other. The house itself was built in one year (1903), but twice as much time was spent on its exterior and interior decoration. An interesting architectural solution was a high parapet on the roof – it allowed to practically hide the roof, so the House with chimeras is the first building “without a roof” in Kyiv. Also, cement, a new material at that time, was used for the first time during construction. In this building, the author of the project lived in one of the apartments with his family, the others were rented out to wealthy townspeople. The layout of the owners’ rooms was made in such a way that the first rays of the sun shone through the windows of the servants: cooks and maids, who had to prepare food and everything necessary even before the residents woke up; closer to noon, the sun entered Horodetskyi’s office, where he usually worked at this time, and at the end of the day it peeked into the living room. Now the building has the status of the Small Residence of the President of Ukraine, intended for receiving foreign delegations.

Mykolaiv Church in Kyiv is also a creation of Vladyslav Horodetskyi. This temple is one of the most interesting architectural structures of the beginning of the 20th century. Built in 1899-1909 in stylized Gothic forms with high pointed spiers, it is distinguished by slender proportions, lightness, and clarity of compositional structure. The total height of the building is 55 meters. The main attention is focused on the western facade – with three portals, a huge stained-glass round “rose” window, above which rises a triangular pediment. On both sides are tall Gothic phials and openwork spires. The perfect proportion and balance of all the masses, the perfection and clarity of the compositional design are combined with the flawless execution of every detail, starting from the sculptural images of saints on the facade and ending with the brass door handles, curtains and latches. The temple impresses with its solemnity and splendor no less than its medieval Western European brothers. Currently, the Church of St. Nicholas is shared between the National House of Organ and Chamber Music of Ukraine (as a venue for concerts) and the parish of St. Nicholas of the Roman Catholic Church in Ukraine, which holds services for the religious community there. 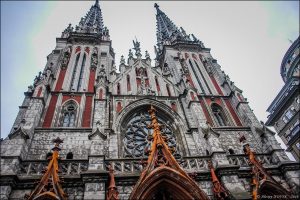 St. Volodymyr’s Cathedral is one of the main shrines of the Orthodox Church of Ukraine. From a tourist point of view, it attracts attention both with its history and with its interior masterpiece painting. Alexander Beretti was invited to be the architect of the future temple. He developed a project in the neo-Byzantine style, which resonates with the Ukrainian Baroque. But the start of construction was constantly delayed – the estimate exceeded the collected amount of money more than seven times. The members of the construction council appealed to Emperor Nicholas I to finance the construction, to which they received a letter of refusal: “The monument is a national monument, therefore no state money is provided for it.” The project repeatedly changed, slowed down and stopped. And finally, in 1882, on the 32nd anniversary of the decision to build, this decades-long epic came to an end. In general, a whole team of artists worked on the construction of the Volodymyr Cathedral, which, in addition to Beretti, included the German Ivan Strom, the French Pavlo Sparro, and the Ukrainian Volodymyr Nikolaev. The main value of the cathedral is the unique paintings on the walls. Thanks to this shrine, the title of cultural monument was awarded. The atmosphere of the cathedral seems to take you back to ancient times – the wall paintings depict figures of saints, martyrs, princes and pictures of historical and biblical events.