Early Anglo-Saxon manuscript illumination is part of the insular art (a combination of Mediterranean, Celtic and Germanic influences) that arose when the Anglo-Saxons encountered Irish missionary activity in Northumbria, particularly on Lindisfarne and Iona. At the same time the Gregorian mission from Rome and its successors imported continental manuscripts, such as the Italian “Gospel of St. Augustine,” and for a considerable period the two styles appear mixed in varying proportions in Anglo-Saxon manuscripts. In the Lindisfarne Gospel (about 700-715) there are carpet pages and insular initials, unprecedented in their complexity and sophistication, but the portraits of the evangelists clearly adhere to Italian models, significantly simplify them, misunderstand some details of the landscape and insert them into a frame with intertwined corners . The portrait of Saint Matthew is based on the same Italian model, or a very similar one, used for the figure of Esdras, which is one of the two large miniatures in the Amiatinus manuscript (before 716), but the style there is quite different, “an attempt to introduce a purely Mediterranean style into Anglo-Saxon England’, which failed as ‘perhaps very advanced’, leaving these images as perhaps the only evidence.

Another mixture can be seen at the beginning of the “Stockholm Golden Codex” (mid-8th century, left), where the portrait of the evangelist on the left is a consistent adaptation of the Italian style, probably a close imitation of some lost model, although it adds a chair-shaped interlacing, and the page text on the right mostly done in the Insular style, especially the first line, with strong Celtic spirals and interlacing. The following lines have a calm style more typical of Frankish manuscripts of the period. But almost certainly both pages were created by the same artist and very confidently in both styles; the portrait of the evangelist John has roundels with a Celtic spiral ornament, most likely taken from the enamelled shields of the hanging bowl. This is one of the so-called ‘Tiberius group’ of manuscripts, which tended towards the Italianate style, and appear to be associated with Kent, or perhaps the kingdom of Mercia during the heyday of the ‘Mercian Dominion’. This is, in the usual chronology, the last English manuscript in which “elaborate spiral patterns in the form of pipes” have been found

From the 9th century, especially the second half, there are very few large surviving items made in England, but this was a period when insular and Anglo-Saxon influence on Carolingian manuscripts was at its height, from scriptoriums such as the Anglo-Saxon missions at Echternach Abbey (although the important “Echternach Gospels” were produced in Northumbria), to the great monastery at Tours (where Alcuin was followed by another Anglo-Saxon abbot), covering the period from 796 to 834. Although the abbey’s own library at Tours destroyed by the Normans, more than 60 illuminated manuscripts of the 9th century survived from the scriptorium. Their style shows many borrowings from English models, especially on the initial pages, where the insular influence remained visible in northern France until the 12th century. Anglo-Saxon metal products made in the vicinity of Salzburg in modern Austria have a counterpart among the manuscripts – the Kuthberht Gospel, kept in Vienna. 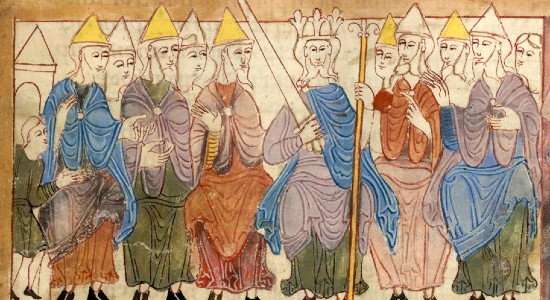 In the 10th century in England, island elements were limited to decorative elements, when the first stage of the “Winchester style” was formed. The first floral ornament, with leaves and grapes, is already known in the St. Petersburg Beda, which can probably be dated to 746. Another large letter in the manuscript is the first letter with an inscribed pattern (i.e., one containing a portrait or a scene, here Christ or a saint) throughout Europe. Derived from classical scrolls of vines or plants, the entanglement largely supplanted the entanglement as the dominant filler of decorative spaces in Anglo-Saxon art, as it did in most of Europe from Carolingian art onwards, although animals within scrolls were much more common in England than elsewhere. . For a long time, scrolls, especially those made of metal, bone, or ivory, mostly had an animal head at one end and plant elements at the other. All these changes were not limited to manuscripts, and may not have been caused by the style of manuscripts, but manuscripts survive in greater numbers than other items, even if in most cases the illumination is limited to initials and perhaps a few miniatures. Several large-scale manuscript illumination projects of that time remained unfinished, e.g. as the Old English Hexateuch, which has about 550 scenes in various stages of completion, giving an idea of ​​the working methods. The illustrations give the Old Testament episodes a setting contemporary to the creation of the manuscript, and therefore are valuable images of Anglo-Saxon life.

Manuscripts of the Winchester School survive only from the period after the 930s; this coincided with a wave of revival and reform in English monasticism promoted by King Æthelstan (reigned 924/5-939) and his successors. Æthelstan promoted Dunstan (909–988), a practicing illuminator, eventually to the position of Archbishop of Canterbury, as well as Æthelwold and the French-trained Viking Oswald. A new-style illumination appears in a manuscript of Bede’s biography of St. Cuthbert, which Æthelstan presented to the monastery at Chester-le-Street c. 937 year. The manuscript has a dedication portrait depicting the king handing the manuscript to the Saint, both standing outside a large church. This is the first real portrait of an English king; it is strongly influenced by the Carolingian style with an elegant painted edging. However, the initials in the text originally combine Carolingian elements with animal forms. The miniatures that were added in England to the Æthelstan Psalter, created on the continent, begin to show an Anglo-Saxon vibrancy in the figure drawing in compositions based on Carolingian and Byzantine models, and over the next decades a distinct Winchester style with agitated drapery and intricate edging develops.

The Benedictional of St. Æthelwold is a masterpiece of the late Winchester style, which drew on Insular, Carolingian and Byzantine art to create a heavier and more grandiose style, where the acanthus leaves sometimes seem too lavish to imitate classical examples . Anglo-Saxon illustration included many lively pen drawings, most strongly influenced by the Carolingian “Utrecht Psalter” (kept at Canterbury from c. 1000); The Harley Psalter is a copy of it. The Ramsey Psalter (c. 990) contains pages with both colored and tinted pictorial styles, including the first initial ‘Beatus..’ with a ‘lion mask’, and the Tiberius Psalter, from the later years before the Conquest England by the Normans, uses mainly tinted drawings. Anglo-Saxon culture also began to enter into greater contact and exchange of influences with continental Latin medieval Europe in those years. Anglo-Saxon patterning was highly influential in northern France during the 11th century, in the so-called “Manche School”, and insular decorative elements such as interlacing remained popular until the 12th century. in the Franco-Saxon style. 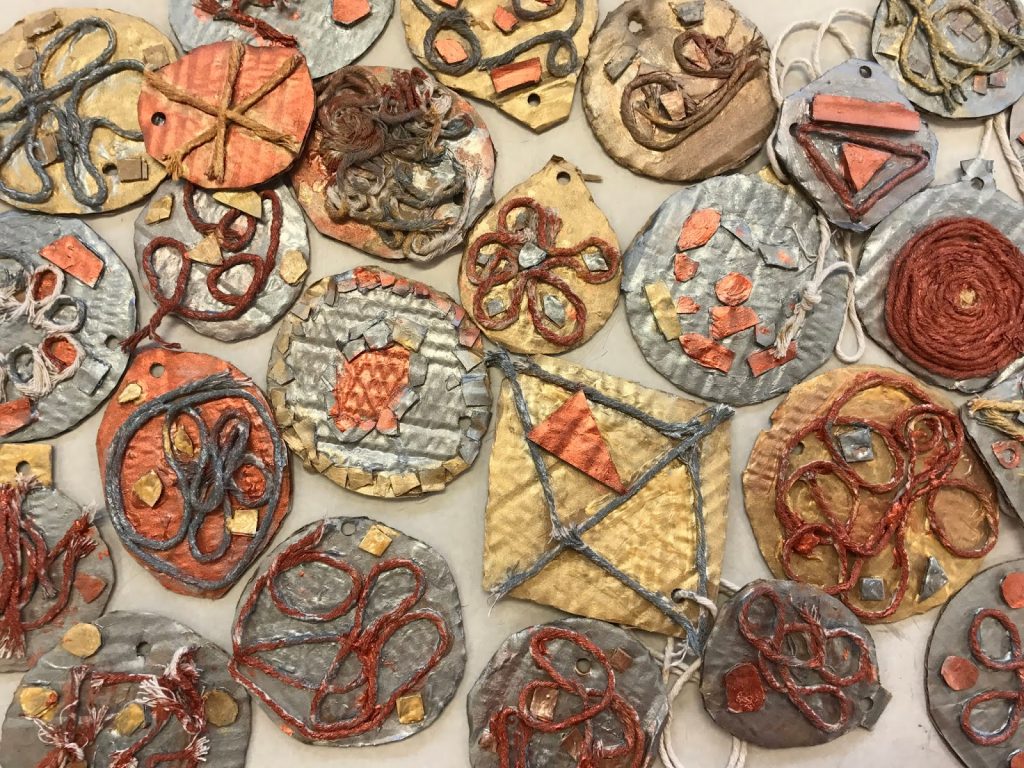 Pagan Anglo-Saxon metalwork initially used Germanic Animal Style I and II ornamentation, which would be expected from recent migrants, but gradually developed a distinctive Anglo-Saxon appearance, e.g. in the 5th century quoit brooch style. Disc-shaped brooches were preferred over the more luxurious products of fibulae in continental styles and Romano-British Celtic brooches; “Harford Farm Brooch” is an example of the 7th century.

Decorations included “clausone” (compartmental enamel), gold and garnets for high-status pieces. Despite a significant number of other finds, the discovery of the ship-burial at Sutton Hoo (probably from the 620s) transformed the perception of the history of Anglo-Saxon art, showing a level of complexity and quality that was completely unexpected for the time. The most famous objects of the find are the helmet and purse lid with similar ornamentation, the belt and other ornaments of the king buried there; they helped to understand the origin of many elements of the Insular manuscript style in Anglo-Saxon art, which had previously caused much controversy.

By the 10th century, Anglo-Saxon metalwork was known as far away as Italy, where English goldsmiths worked on an altar plate in the old St. Peter’s Basilica in Rome, but almost nothing survives after the ravages of the Norman Conquest in 1066 and the English Reformation; none of the known large pieces of artefacts—arks, doors, and statues—have survived, while several contemporary continental examples have survived.

One of the few artists whose name is known and there are descriptions of his works is the monk-artist Sperhavok of the 11th century. According to several sources, including the Norman chronicler Goschelin, who knew him personally, Sperhafok “was eminent in painting, gold engraving, and jewelry,” where by painting probably meant the drawings of illuminated manuscripts. Probably, it was his artistic works that brought him into contact with the royal family and contributed to his rapid promotion in the church. Even such imprecise data are valuable evidence of what Anglo-Saxon metalwork looked like. The surviving Anglo-Saxon engraved figures are close to the much more numerous pen drawings in manuscripts, which were also a feature of the Anglo-Saxon style. Frescoes were also apparently often created by manuscript illustrators. Therefore, Gochelin’s description indicates an artist who was skilled in the main branches of Anglo-Saxon fine art, of which goldsmithing was then the most prestigious. One of the secular jewelers of the 11th century was even a ten.