Romanesque art lasted between ca. 1000 before the beginning of Gothic in the 12th century, and was associated with the growth of monasticism in Western Europe. The style originally originated in France, but spread to Christian Spain, England, Flanders, Germany, Italy, and other territories, becoming the first medieval style to spread throughout Europe, albeit with regional differences. The birth of the style coincided with a significant increase in church building and an increase in the size of cathedrals and major churches; many of them were rebuilt in later periods, but often in the Romanesque period had almost the same size as today. Romanesque architecture was dominated by thick walls, massive structures perceived as a single organic form, vaulted roofs and rounded windows and arches.

Figurative sculpture, originally colorfully painted, plays an important role in these buildings, forming part of the capitals of the columns, located around impressive portals, usually centered on the tympanum above the main door, as in Vezle Abbey and Cathedral and Auten Cathedral. Reliefs were still much more common than free-standing stone sculptures, but Romanesque reliefs became much deeper and some of their elements were completely detached from the wall behind them. Large carvings also became important, especially painted wooden crucifixes (like Gero’s cross from the very beginning of the period) and sculptures of the Virgin Mary as the Golden Madonna of Essen. Royalty and higher clergy began to commission life-size sculptures for tombstones. Some churches had massive bronze doors decorated with panels with narrative reliefs, such as the Gniezno Gate or the cathedral door at Hildesheim, “the first decorated bronze door cast in one piece in the West since Roman times” and probably the best until the Renaissance.

Most churches contained a large number of frescoes; a typical scheme consisted of the following frescoes: “Christ the Great” on the eastern (altar) end, “The Last Judgment” on the western end, above the door, and scenes from the “Life of Christ” were located opposite typologically corresponding scenes from the Old Testament on the walls of the nave. “The largest surviving monument of Romanesque frescoes”, much smaller than its original volume, is located in the abbey church of Saint-Savin-sur-Gartamp near Poitiers (France), where frescoes can still be seen on the rounded vault of the nave, in the crypt, in the portico and some other places. A similar cycle at San Angelo in Formis in Capua in southern Italy, created by Byzantine artists and their Italian students, illustrates that the influence of the Byzantine style continued to dominate much of Italy at the time. 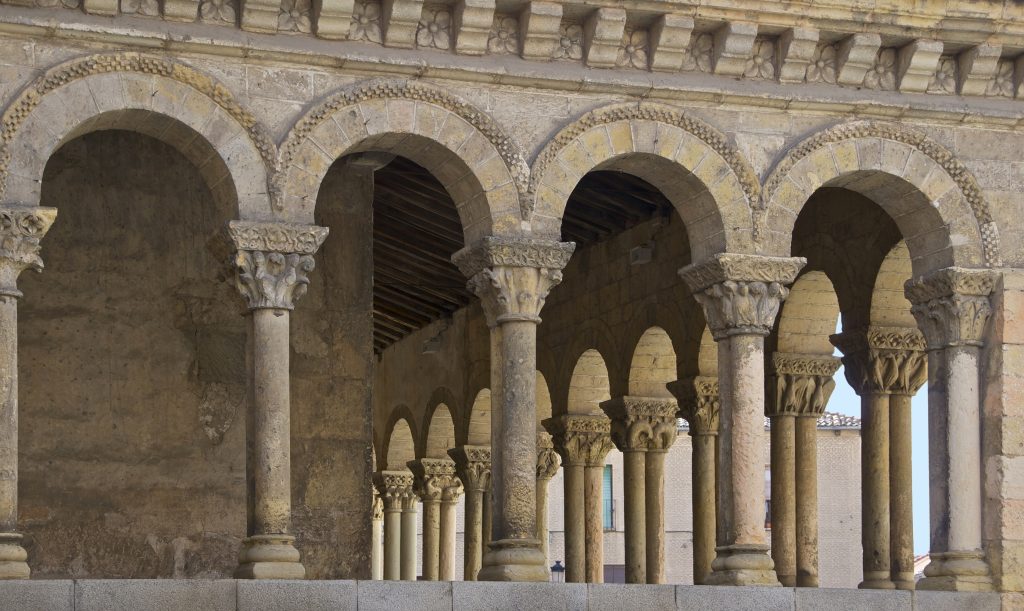 Romanesque sculpture and painting are often very lively and expressive, and also very inventive in their iconography (ie which subjects are chosen and how they are treated). Although Romanesque art absorbed many features of the Classical, Romanesque artists rarely attempted to achieve a Classical effect (except perhaps the Maas school). Because art was now seen by a larger part of the population, and because of the challenges of new heresies, art became more didactic, and local parish churches became “poor man’s bibles.” At the same time, grotesque monsters and monsters and battles between them became popular topics, which were barely given a religious meaning. This irritated Bernard of Clairvaux, who famously condemned such distractions in monasteries:

But in the monastery, in full view of the monks reading, what is the purpose of this senseless monstrosity, a strange kind of formlessness in form? Why these unpleasant monkeys, these menacing lions, these monstrous centaurs, why these demi-men, these spotted tigers, these soldiers in battle, hunters blowing bugles? … In short, there is such variety and diversity of strange forms everywhere, that we may prefer reading frescoes to books.

He may have seen the miniature on the left, which was created at Cito Abbey shortly before the young Bernard was transferred there in 1115.

During the Romanesque period, typology became the dominant approach in theological literature and art to interpret the Bible, where Old Testament events were seen as foreshadowing aspects of the life of Christ, and were shown paired with a corresponding New Testament episode. Often, the iconography of the New Testament scene was based on traditions and models that came from Late Antiquity, but the iconography of the Old Testament, due to the lack of precedents, had to be invented in this period. New themes were developed, such as the tree of Jesse, and the depiction of God the Father became more acceptable.

The vast majority of surviving art from that period is religious. Maas art was the most refined regional Romanesque style, from which excellent metalwork survives, often combined with enamel, as well as elements of classicism rare in Romanesque, such as the Liège font or the Cancer of the Three Kings in Cologne Cathedral, which is one of the surviving works of Nicholas of Verdensky, a famous master in northwestern Europe at that time.

In the Romanesque period, stained glass became a significant art form, although very few have survived. Among the illuminated manuscripts, the Bible became the new focus for intensive decoration, although the Psalter continued to be important. A strong emphasis on the suffering of Christ and other holy figures entered Western art, a feature that significantly distinguishes Western art from both Byzantine and classical art throughout the Middle Ages. Hero’s cross (965-970, on the border between Ottonian and Romanesque art) is considered the first work that demonstrated this.

At the end of the Romanesque period, there was a growing emphasis on the Virgin Mary in theology, literature, and art, which reached its peak in the Gothic period.

Gothic art is a rather variable term depending on the type of art, place and time. The term itself comes from Gothic architecture, which developed in France sometime from 1137 with the rebuilding of the abbey church of Saint-Denis. As in Romanesque architecture, sculpture was an integral part of the style, with even larger portals and other figures on church facades being the location of the most significant sculpture until the end of the period, when large carved altarpieces and enthroned images, mostly of painted and gilded wood, became an important focus of many churches. Gothic painting appeared no earlier than 1200 (although the date of appearance has many definitions), separating from the Romanesque style. The Gothic style of sculpture appeared in France ca. 1144 and spread across Europe, becoming an international style by the 13th century, replacing Romanesque, although in sculpture and painting the transition was not as sharp as in architecture. 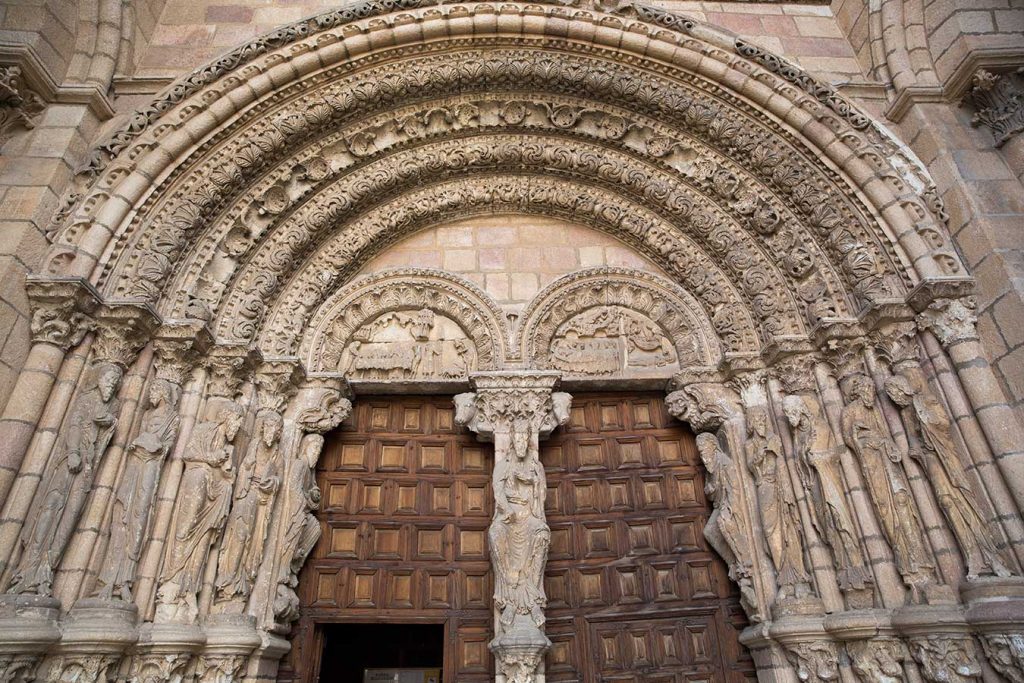 Most Romanesque cathedrals and large churches were replaced by Gothic buildings, at least in the areas of economic growth of the period, and surviving Romanesque architecture can now be seen in regions that were relatively in decline at the time of the Gothic, such as many southern regions of France and Italy or in northern Spain. The new architecture allowed much larger windows, and the art of stained glass reached a quality that was no longer surpassed, and in the mind of the average person is associated precisely with the Gothic, although churches where almost all of the original stained glass is preserved are extremely rare, e.g. Church of Sainte-Chapelle (Paris) in Paris. There are no such examples in Britain.

Most of the Gothic frescoes have also not survived, although they remained very common in that period, but in parish churches they were executed quite crudely. Frescoes often also existed in secular buildings, although royalty preferred the much more expensive tapestries, which they carried with them when moving from one of their castles to another, or even took with them to war – the best collection of Late Medieval textiles comes from the Swiss spoils of Battle at Nancy, when they defeated and killed the Duke of Burgundy, Charles the Bold, and captured his baggage wagons.